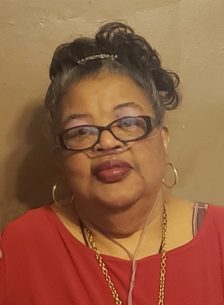 Barbara Ann Groomes Franklin transitioned on Saturday August 20, 2022, at Lynchburg General Hospital.  Barbara  was the daughter of the late Hector and Louise Groomes. In addition to her parents, she was also preceded in death by three sisters; Rita Parker, Odaris Groomes, and Brenda Groomes.

Barbara was a faithful member of Mount Carmel Baptist Church where she served as a member of the Senior Usher Board, The Missionary’s Club, Kitchen Committee, Paradise Singers, and the Mass Choir. Barbara was employed at the Central Virginia Training Center for over 40 years.

Barbara had a charitable heart and was always willing to give a helping hand.

Condolences in the loss of our dearly beloved Barbara! I spoke with her recently and shall remember that conversation! I’ve missed her presence and strong voice singing those great songs of praise at church but am glad she made it to the Senior Missionaries last anniversary! Barbara served our Church, the Missionaries, the Ushers, the Hospitality Committee, Paradise Singers freely and supported our Sunday School and other ministries! Gone but will not be forgotten! Rest In Peace.

Our deepest sympathy to the family. We remember her beautiful face and smile, She always had an encouraging word. May you find strength and peace in the days to come. I know God will see you through! Sending love, Earl & Vernessa Harvey

The pastor, members and friends of the Mount Carmel Baptist Church extend our heartfelt sympathies to the family of our dear devoted member, Sister Barbara G. Franklin. Please do not hesitate to call upon us as needed. May God watch over you in this time of bereavement.

To Mel, Kelly and family- my sincere condolences on the loss of your matriarch. I will always remember the warmth of your Mom’s smile and hugs at church. Not too mention her fashionable style and her Love for serving God and others. Keeping you all in my thoughts and prayers!

I am so sorry to learn of Barbara’s death. As well as my neighbor, I worked with her years ago at “TheTraining School”. She was always upbeat, patient and kind, treating everyone, residents and staff members with equal respect. She really loved her family❤️

To Melody and family; I send you my deepest condolences on the passing of Mrs. Franklin. My prayers are with you now and in the days ahead.

My Deepest Condolences to Leroy, Mel, Kelly, and Barbara's heartbeats...Rianna and Raniya!! May God provide you all with the comfort needed during this difficult time and surround you with peace and reminders of great memories that you shared! With sincere sympathy, Kimberly and Mildred Smith

Barbara, will be surely missed by all that knew and loved her. My heartfelt condolences to the family. I will miss our phone conversations that we shared regularly. Rest In Peace my cousin.