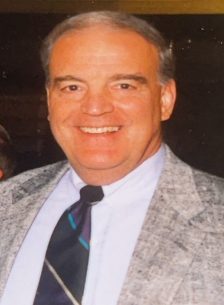 Dr. Benjamin F. Knight, Jr, 89, died peacefully on Sunday, January 1, 2023.  He was the devoted husband to Barbara Satterwhite Knight for 50 years, until her death in October 2007.  He had missed her dearly over the past 15 years, and we rejoice in the knowledge that they are together again, celebrating the promise of Heaven.

A lifetime resident of Lynchburg, VA, he was the son of the late Benjamin F. Knight, Sr., and Mary Helen Thomas Knight. After graduating from E.C Glass High School, he proudly served in the U. S. Navy Hospital Corps during the Korean War. Upon completion of his service, he attended Lynchburg College and the University of Richmond, before entering Medical College of VA School of Dentistry.

It was during a break from school in December 1956 that a divine twist of fate would change Ben’s life forever. Working part-time for the U.S. Post Office in Lynchburg, he was struck by a postal vehicle and sustained moderate injuries.  During his hospital stay, he met and fell in love with Barbara, the nurse attending to his care. They eloped in July 1957.

With mutual, unwavering devotion and support, they set their goals toward creating a legacy of teamwork and resourcefulness, enduring long hours, inadequate income, meager housing, second jobs, and staggered shifts to facilitate raising babies. They were determined that the life they dreamed of required nothing less.

Ben earned his Doctor of Dental Surgery Degree from the Medical College of Virginia School of Dentistry in 1961.  Immediately following graduation, the family relocated to withstand more of the same lifestyle as he completed his Oral Surgery Internship at Norfolk General Hospital, Norfolk, VA, and his Oral Surgery Residency at Wheeling Hospital in Wheeling, WV.  He furthered his Oral and Maxillofacial Surgical and Anesthesiology training at the Graduate School of Medicine of the University of Pennsylvania, and at the U.S. Army Institute of Dental Research at Walter Reed Medical Center in Washington, DC.   In 1964, he and Barbara settled back home in Lynchburg, where he opened his private practice and joined the staffs of Lynchburg General and Virginia Baptist Hospitals.

Dr. Knight’s work ethic and meticulous attention to detail earned the confidence and respect of his peers, as well as members of the surrounding communities.  He was often invited to assist fellow Oral Surgeons with particularly complicated cases and shared his good fortune providing complimentary services at clinics in rural and underserved areas around Virginia.  He was elected to the Atwood Wash Society of Medical College of VA, and the Oral Surgery Society of the Graduate School of Medicine at the University of Pennsylvania.  A Fellow in the American Association of Oral and Maxillofacial Surgeons, he also served as President of the Virginia Society of Oral and Maxillofacial Surgeons and was a member of the Lynchburg Dental Society.

In his spare time, Ben enjoyed officiating football, discovered as a source of much needed additional income while he was in dental school. The Virginia High School League recognized him for more than 50 years of service. He also participated at the collegiate level, working in the Mason-Dixon, Old Dominion Athletic, Southern, and Atlantic Coast Conferences.

A private memorial service will be held at a later date.

The family would like to extend our deepest gratitude for the care and compassion provided to Dad by the kind staff at Heritage Green Assisted Living/Daybreak.

Benjamin does not have any posts. Be the first to add one