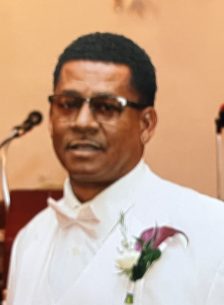 Bernard Chilton, III, 62, of Evington, passed away on February 23, 2022.  He was born to the late Bernard Chilton, Jr. and Edith (Johnson) Chilton in Lynchburg, Virginia on September 22, 1959. He graduated from Amherst High School and recently retired from a 44 year career at WESTROCK (formerly Rock Tenn). In his free time he was immersed in all things basketball and anything his children or grandchildren were involved in.

Bernard was blessed with a loving family. He married his former crush Shirley (Hancock) Chilton on September 9, 2017. Bernard raised his two children Quintus and Andre with patience and discipline. He taught them the value of hard work and athletic ability.

The family wishes to thank Westrock, BWXT, Lucille Chambers, Bonnie Williams, Ora Myers (Mike) for their continued support. Additionally, we would like to thank the many friends, family, and coworkers who called, sent condolences, and stopped by to share stories of Bernard.  Special thanks to Reverend Edward Jones, Reverend Ronnie Haynes, and the members of Bolling Hill Baptist Church of Madison Heights, Virginia.

In lieu of flowers, memorial donations may be given to the American Cancer Society.

Celebrate Bernard's life with a short message, photo or video!

My deepest condolences to the Chilton family and friends. Bernard is one of the most friendliest people I've ever met. Even though I haven't seen Bernard in a long time, I will always have such fond memories of him. God Bless You and Rest You, old friend. Deleva Cheryl Pierson

Shirley, I am so very sorry to hear about your loss. Please know I am praying for you . love you always!

Prayers and Condolences to you all. Will keep yall lifted in Prayer. 🙏🏽💐🕊

Shirley & family, Our Deepest Sympathy and Sincere Condolences at this difficult time.

Though we did not know Mr. Bernard Chilton personally, we know that he left decent, kind-hearted, trustworthy men as his legacy. Quin, Kingston, and Kameron -- you are in the prayers of everyone at Perrymont Elementary.

Posted by Ayanna Stamps-Glover on February 28, 2022

Our Deepest Sympathy & Sincere Condolences to The Chilton Family & friends. You will be missed Rest in Paradise Bernard❤ Lovingly submitted by Alvin & Roberta "Bird" Little

Prayers to the Chilton Family. Bernard touched the hearts of so many people. He never meet a stranger. RIP

My condolences goes out to the Chilton family/ RIP Bernard 🙏🏾

I’m so very sorry to hear about this, Shirley. I am sending my condolences and prayers for you and the entire family. May God bless and keep you all.

My condolences/prayers for The Chilton Family. May God be with y'all and always keep the memories in your heart. Rest now dear friend. R.I.P. Bernard

So sorry hear about his loss. Such A nice guy and a neighbor. Prayers to the family.

Bernard loved Basketball 🏀 He could play the game as for talk you out your game. Lol! He meant alot to the community his family as for US guys at fort ave Basketball court/surrounding areas. He was mentor to many as for a father figure. He will truly be missed. RIP Nard You will be missed ❤🏀

I send condolences to the family.I have known Bernard since school many years.He has always been the same funny crazy guy,with that big smile.

My Condolences to the Chiltons family,My You Rest In Peace my Brother

Sorry about your loss. My prayers & thoughts are with the families.

In your time of sorrow, may you find peace in his presence, as he gives you strength for today and hope for tomorrow. With Prayers and Sympathy, Mike and Sharon

My deepest condolences are extended to the Chilton family during this difficult time. I am sorry that I will not be able to e there to celebrate his life but pray that God will provide you with his comfort and you will rest in the memories. R.I.P. Nard!