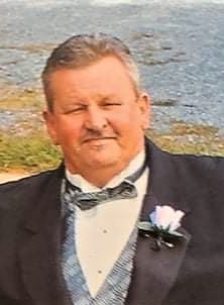 A service for “Jr” will be held at 12:00 p.m. Sunday, September 12, 2021, in the chapel of Tharp Funeral Home Lynchburg with Chaplain Wayne Lanham officiating. The family will receive friends immediately following the service.

Carrington E. Gowen, better known to his friends as Jr, peacefully departed this life on Monday, September 6, 2021 with his baby girl by his side.
He was a Roofer by trade for over 35 years and owned Gowen Roofing. He also drove part time for Allied Cab and enjoyed the night life for nearly 20 years.
No matter where he was or what he was doing, he was always “Bad to the Bone”.
He was born in Nelson Co. VA on April 11,1955 to Carrington and Irene Gowen. He was predeceased by his parents, 2 brothers(Johnny & Tommy Wayne), a sister(Linda) and his infant son Justin Michael Tyree.
He is survived by the mother of his children and lifelong friend, Lois Cyrus, 2 children  Jason & Whitney(Adam)Gowen, a sister, Carol(Steve)Sutliff and nine Grandchildren who were truly the light of his life and he lived for them until the end; Hannah, Xavier, Alyssa, Caedmon, Jordan, Kierra, Kaidon, Noah and Presleigh. He also had several special friends who looked out for him until the very end and deserve recognition for all the special favors, treats and good memories they helped create; Young’n Fowling, Debbie Goodbar, Chris Mays, Ronnie Godsey and Nita Martin. He appreciated you all and you definitely had a place in his heart.
He was a loving Father, a hard worker and a treasured friend to many. He was truly one of a kind and he will never be forgotten. “In the end, my life was priceless…” Much Love -Jr.

A service for “Jr” will be held at 12:00 p.m. Sunday, September 12, 2021, in the chapel of Tharp Funeral Home Lynchburg with Chaplain Wayne Lanham officiating. The family will receive friends immediately following the service.

Sending prayers for Whitney, Jason, Lois & the grandchildren. I didn't know Jr, but I do know he had a big impact on those that loved him. Wishing you comfort & peace on this part of life's journey.

I had the privilege of getting to know Jr many years ago. He was a true friend in every way. Jr never missed an opportunity to show his love, even to strangers. He was a kind soul with such a huge heart. Definitely one of a kind. I will always cherish our friendship and memories. May he rest in peace. Prayers for his family during this difficult time.

Posted by Debra Sprouse on September 9, 2021

Fly high brotha! You truly were one of a kind!

Jr will never be forgotten! He was a awesome man threw and threw! I consider myself blessed for knowing him. I love you Whitney and if you need anything, please let me know.

Posted by Rhonda Rankin on September 8, 2021

So sorry for your loss. You are in our thoughts and prayers at all times. We love you

Posted by John and Lisa Eagle on September 8, 2021

So sorry for your loss. You are in our thoughts and prayers at all times. We love you

Posted by John and Lisa Eagle on September 8, 2021