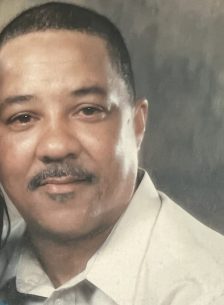 Dennis Alonza Megginson, “Dink”, departed this life on Saturday January 7,2023 at his residence in Roanoke Rapids, NC. He was born on September 8, 1959, the son of the late Elaine Megginson Jackson and was the stepson of the late Jessie Jackson. He was proceeded in death by his brother, Larry “Truck” Megginson. At an early age he accepted Christ and joined Mt. Peeler Baptist Church in Concord, VA. He was part of the first class to graduate from Heritage High School. Football and taking care of his family was his top priority. He was a faithful and dedicated employee of Reser’s Fine Food for greater than 20 years until his health declined. Dennis was a fun loving and charismatic man! He was always willing to lend a hand to anyone in need. He was loved by many and touched so many lives.

A Celebration of Life will be held on Sunday, January 15, 2022 at 2:00 p.m. at Tharp Funeral Home, Lynchburg. Interment will follow in the Archer Creek Cemetery.