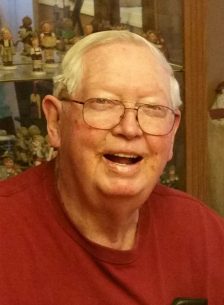 Donald Ray “Bug” Taylor, 84, of Forest passed away on Thursday, January 12, 2023. He was born in Big Island, VA on March 13, 1938. A son of the late Garrett Elmer Taylor and Kathleen Edith Carter Taylor. In addition to his parents Bug was preceded in death by his first wife of 32 years, Norma Markham Taylor; two children, Bonnie Sue Taylor and Donald Ray Taylor, Jr. and his son-in-law, Randie Goff.

Bug was a simple, kind but humble man. One who’s laughter filled rooms and was always so contagious. A longtime member of Hunting Creek Baptist Church, where he served as Deacon and sang in the choir. After graduating from high school Bug joined the United States Air Force and served his country for four and half years. He had a strong work ethic, after returning home from service Bug worked for Georgia Pacific for 41 years as an Electrical Instrumentation Technician before retiring. He was a charter member of the Big Island Rescue Squad, 1013 Big Island Federal Credit Union, also the Big Island Hunt Club. He also enjoyed spending time in the outdoors while hunting, fishing, trips to the beach, time in the mountains and riding his motorcycle in past years. He recently had attended Forest United Methodist Church.

A funeral service and celebration of Bug’s life will be conducted at 1:00pm on Wednesday, January 18, 2023 at Tharp Funeral Home & Crematory, Lynchburg with Rev. Ken Bledsoe officiating. Burial will follow at Hunting Creek Baptist Church Cemetery and a reception will be held following the graveside in the church fellowship hall. To send condolences online please visit tharpfuneralhome.com. Tharp Funeral Home & Crematory, Lynchburg is assisting the family.

Celebrate Donald's life with a short message, photo or video!

Andrea So sorry to hear about your Dad. Prayers for you and all the family

We loved Donald (Bug) so much. He had such a sweet and tender heart and was so much fun. We really enjoyed the time we got spend with him and June. And June, you know how much we love you and cherish you. We are praying for you and the family.

Pam,Stephanie, Andrea i am so sorry to hear about uncle bug all the childhood memories came flooding back when i got the call,,,,thinking about the get together times and how your dad would laugh out so much at all the dumb things we did,and picking at your mom....he may be gone from us but he will never be forgotten i love yall and you know it)))

My PRAYERS and THOUGHTS are with you June and Family.He was such a sweet heart and loving cousin.

We're going to miss our neighbor tremendously. Our condolences to June and the family.

Posted by Buddy and Hannah Vaughan on January 13, 2023

My heart absolutely just breaks for June, i love them so much, especially seeing her and Don together, such a sweet and loving couple and such an epic love story they shared together. Sending all my love and prayers

My deepest sympathies and condolences to my cousins Pam, Stephanie, Andrea and your families. Your dad was an inspiration for me as a young child and I admired him greatly. May God grant you all comfort and peace at your time of sorrow and grief.

I am so sorry to hear of Bugs passing. My Prayers go out to all the family.

Sympathy to Bug's family. He was kind hearted and loved by everyone. Rest in peace my friend

I have known (Bug) for many years, such a wonderful, kind man, never heard him say a bad word about anyone. You will be missed my friend. Fly high with the angels.