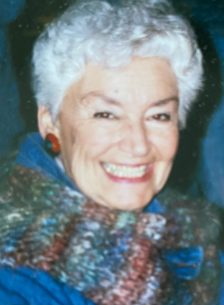 Born in 1928 in New York City to Leila Marienhoff and Martin Colodny, she left her home to attend Lynchburg College (now University of Lynchburg) after high school. It was there that she earned her bachelor’s degree in Sociology and met her future husband, David Rodé, a handsome WWII Veteran who was attending LC on the GI Bill.  She spent the next 25 years as an Air Force wife while raising their three children. She held down the fort while her husband fought in three wars, packing up to move every few years to locales as diverse as Texas, Panama, and Paris, France. In 1972, David retired, and they returned to his childhood home at Oxford Furnace Farm in Campbell CO, VA and built their dream home. Doris became licensed as a real estate agent, did that for a stretch, and was a member of the Campbell County Planning Commission for 28 years, serving as Chairwoman for several years. Doris and David travelled extensively until David’s death in 1999. Doris continued to live on the farm until transitioning to Valley View Retirement Community in 2018.

The most important and cherished part of her life was her family. She is survived by her three children: David Rodé, Janet Siegel, and Joanne Langford; five grandchildren: Matt (Catherine) Langford and Briana (Kyle) Stevens, Casey and Noah Siegel, and David W Rodé; and two great grandchildren: Elise and Claire Langford; and sister-in-law, Elfriede Colodny.

Doris was feisty to the end and always spoke her mind. She enjoyed reading and responding to posts on Facebook to keep up with her busy family. She was always curious and took the time to find out the stories of people in her community. She was easy to talk to and a good listener. She will be missed!

The family thanks the staff at Valley View for the excellent care and attention she received. Doris enjoyed the companionship and friendship of her fellow residents and staff.

Donations in her name to Lynchburg Humane Society would be appreciated.

I worked w/Doris YEARS ago @ REIC (real estate office on Lakeside Dr next to LC) she always a unique person to talk to very wise & friendly! I'm so thankful I had the opportunity to know her!! She was always so pretty & loved her family!! RIP my friend!

I would like to extend my deepest sympathy to the family of Doris Rode. She was like a third grandmother to our son. It was delightful to spend time conversing with this lovely lady. She was so refined, yet down to earth and fun! Doris and her husband raised a wonderful family which she loved dearly. I am grateful to have known her. Sending love to her family, our very dear friends.

Janet, Joanne and David, our mothers were so fortunate to have found each other during your Dad’s years in Viet Nam. They were such dear friends. I have so much enjoyed texting with your Mom since getting in touch with your family once again. Sending my love to your whole family.

I am so sorry to read about the lose of your mother, Joanne, and your grandmother, Bree and Matt. She seemed like a woman who knew how to live.

Posted by Winkie Schoew on September 6, 2022

My heart and prayers are with your family during your time of loss…I know, your family has no idea who I am, however, I grew up in the house on top of the hill, Oxford Furnace…due to the kindness of your Mom and Dad..And for that I will be forever thankful…They literally had one of the biggest influences in my life, and because of them I try my best to pay it forward! 💕

To all of the Rode family, please accept our sincere sympathy in the loss of Doris. We enjoyed her in Panama, loved that she took over the third grade class that our youngest son was in when his teacher had to return to the States.

Posted by Charles (Joe) and MaryEllen Slone on September 3, 2022

I never met you in person Ms Doris, but I do remember the messages we shared via Facebook during the time David came and stayed with me during his eye surgeries. You were so sweet and kind to thank me for taking care of your precious son. I know you both loved each other deeply. My thoughts and prayers are with everyone during this heartbreaking loss.

Posted by Kathy Matheny on September 1, 2022

My condolences to the Rode family. I met Doris when I became friends with her daughters JoAnne and Janet at the Howard Air Force Base stables in Panama. I remember of Dave as having a wicked sense of humor, and Doris as a very kind, but had an equally funny sense of humor as well. Due to my friendship with JoAnne, they took me on a beach trip and I was at their home many times - they were always very kind to me. My parents were very fond of the Dave and Doris, I imagine they are all having an their own Air Force Reunion on the other side. Holly Nordal