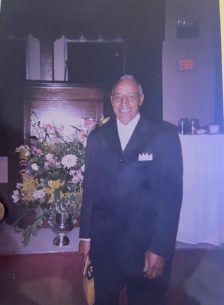 Douglas Leon Fowler Sr, 82, of Lynchburg VA, was found deceased on July 25, 2022 in his home of unknown causes. Douglas was born on May 31, 1940 to David Carl and Olivia A. Fowler at Lynchburg Hospital.

After graduating from Dunbar High School in 1959 he served in the Marine Corps from 1964 to 1970 and served in combat for the Vietnam War.  After his honorable discharge, he was employed and retired from Babcock & Wilcox.

He was the widower to Barbara R. Fowler (passed April 21, 2021) and brother to Ethel Woods who preceded him in death on January 25th, 1997.  His survivors are his 3 children (Douglas L. Fowler II “Herc”, Sean R. Fowler, Sharon M. Fowler), his eldest brother Richard Lee Fowler, and a host of nieces, nephews, grandchildren and great grandchildren.

You may pay your condolences to the family at Tharp Funeral Home in Lynchburg from 4-6pm on Saturday, August 6th, 2022.

Celebrate Douglas's life with a short message, photo or video!

To the Family of Doug Fowler, I offer my sincere condolences. Doug and I were classmates of the Dunbar Class of '59. He was a good guy and I will miss him. My prayers are with his family for God's comfort and grace. Blessings to you all. Vivian C. Hudson

My condolences to the entire family. It’s been years since I’ve seen Uncle Leon, but I remember his playful nature and ability to make people laugh & smile. May he rest peacefully. 🕊🕊🕊

Posted by Vanessa Woods-White on August 8, 2022

I want to give my condolences to the Fowler family: (Cousins)Herc,Sean,Sharon and Uncle Richard. It's been many years since Uncle Leon and I have been in contact. I know he is up there smiling over everyone. 🎈🎈Uncle Leon🎈🎈 🏝Rest In Paradise🏝

My sincere condolences to the family. Doug rode the DAV van that I drove to Salem on numerous occasions. Of course I knew him long before that. We always got along great. RIP bro.

I'm so sorry for your loss. I had the pleasure to work with Doug at C.R.Hudgins many moons ago. We would bump heads then be ok. He was a real joker. He use to call me Fridget Bridget. I'm sorry again for your loss and the family will remain in my thoughts and prayers.