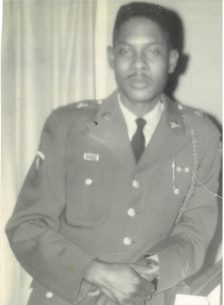 I know you’ll miss me,
But now I’m free.
There’s no more pain or misery.
My body was tired,
I put up a good fight,
But God took the pain away
And now I’m alright.
Please don’t cry or be too sad
My suffering is gone, for me I’m glad.
I didn’t want to leave you but I needed
To be free, I tried to stay but this
old pain got the best of me.
So remember this during sunshine, or
rain, that I am free and there’s
No more pain.

He joined the Army at an early age. He joined St. James AME Church before going into the Army. He later joined the Baptist Church Ebenezer West in Athens, Ga. After relocating to Virginia, He joined Bolling Hill Baptist Church where he served until his sickness and death. He was a member of the American Legion and the Boston Community in Boston, Ga.

He was preceded in death by three brothers, Livingston, Harry, and Franklin Glenn; one sister, Lillian Moorehead.

A celebration of life will be held at 1:00 pm Friday, August 26,2022 at the Bolling Hill Baptist Church. Interment will be at a later date at the Boston Cemetery, Boston Georgia.

Celebrate Edward's life with a short message, photo or video!

Mrs. Frances, please accept my deepest condolences. Sorry I am not in Virginia but will be in Boston. Take care and be blessed.

I love and miss you Deddy Deddy and I walking to church

Sending prayers and condolences to the family and friends of my friend Mr Edward Glenn. I have learned so much from him during our conversations. Thank you for your words of wisdom’s. R I P. 🙏🏼🙏🏼🙏🏼❤️🌹.