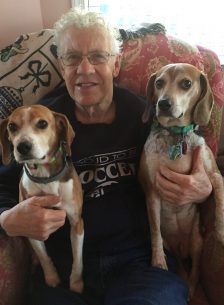 The Funeral Mass for Oakley will be Thursday, May 19, 2022 at noon at St. Thomas More Roman Catholic Church, 3015 Roundelay Road, Lynchburg, VA 24502. Visitation with the family will begin at 11:00am.After Mass, there will be a luncheon in More Hall; please join us! If you are unable to attend, please watch the livestream/recording on the St. Thomas More Lynchburg Facebook page or by visiting www.stmva.org.

I am truly sorry for your loss, Kathy. Oakly was a wonderful soul, who helped me see humor in some of my darkest times. I know you will miss him terribly, but please know he will always be in your heart. Much love and strength to you.