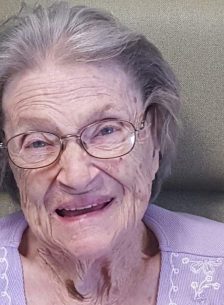 Elizabeth Bennett Hale Wilkerson, 97, of Roanoke went to be with the Lord on Sunday, September 18, 2022, at Roanoke Memorial Hospital. She was born on May 6, 1925, in Roanoke to the late Dollie B. Adkins and George Bennett Hale. In addition to her parents, she was preceded in death by her husband, Wier J. (Jack) Wilkerson.

Betty held many positions in her life, she was known for watching children in various positions as well as working at Viscose and Sears. She was a member of many organizations including the Roanoke Garden Club, the Vinton Lions Club, Vinton Women’s Club, Roanoke Valley Mineral and Gem Society, and IOOF Rebeccah’s. She served in a variety of PTA’s and was on the Band and Choir Boosters in Roanoke City and County. Betty also was very active in both the Boy and Girl Scouts programs. She served her Lord in various positions such as VBS, children’s choir helpers, Sunday school teacher, and even as a choir member. She loved cooking, reading, canning, gardening, bowling, and sewing. She will be missed by all who knew her.

The family would like to extend a special thank you to Carilion Roanoke Memorial Hospital, Palliative Care Unit for the great care that they provided Mrs. Wilkerson and the family.

In lieu of flowers memorial contributions may be made to Vinton Baptist Church or Angels of Assisi.

A private memorial service will be held at a later date.

Celebrate Elizabeth's life with a short message, photo or video!

Jackie, I am so sorry to hear of your mom’s passing. She was a wonderful person and I know you will miss her a lot. I always enjoyed talking to her when you and Rhonda were doing things together. Brenda Brooks(Rhonda’s mom)

Charles, Johnny, Soo, Sorry to hear about your Mom's passing. It's been awhile since Golfside Ave. Hope she didn't suffer? Hope ya'll are doing OK. If you get a chance, give me a call: 540-521-6415 Thoughts and Prayers for you. Ron

Posted by Ron Hollingsworth on September 25, 2022

Betty has always been a special person to us. We met her when we moved into the neighborhood about 50 years ago. She will be in our hearts forever.