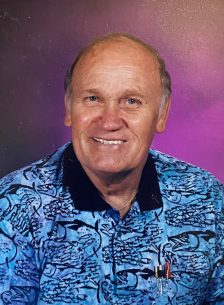 A celebration of life will be held at 4 p.m. Saturday, June 11, 2022, at Forest Alliance Church in Forest, VA with a family interment to follow Saturday, June 18, 2022 at the Royal Palm Memorial Gardens in West Palm Beach, FL.

James Allen Huff, 84, of Lynchburg, went to be with Jesus on Sunday, May 29, 2022.  Born Oct. 21, 1937 in Independence, KS to Allen Huff and Lillith Bohannon Huff, he was much loved by his family and friends in every community he lived in.

James served in the United States Air Force right out of high school, then went on to marry his first wife, Irene Alice Isabella Huff, in 1959 and work in various businesses including a hardware store and RCA. He began volunteering as a firefighter with the local department and soon became a paid full-time firefighter.  In his down-time, he began and ran a successful tractor business working with local contractors. They had four children together, James Alva Huff (d. 6 years old), Janine Adele Huff Rodriguez (m. Scott Rodriguez), Laura Ann Huff Chastain (m. Scott Chastain) and Joel Allen Huff (m. Kimberly Needham Huff).  He remained a dedicated firefighter in south Florida for 22 years, enjoying fishing with his sons-in-law and traveling with his family. He finally retired and moved to Independence, KS where he & Irene bought and ran their own motel for several years. After a successful stint in motel management, they felt called to become Prayer Missionaries for the Native American Bible Society and moved to Flagstaff, AZ, where they worked among the Navajo Indians for another four years.  Retiring from missionary work, they returned to Florida where he volunteered as a Teacher’s Aide in the local elementary school.  Always managing to travel and visit their six grandchildren in Virginia, they finally decided to move to Virginia to be close to the grandchildren.  There he began yet another new ministry, this time to prisoners.  Founding Freedom Family Fellowship, he preached weekly in the local jail and ran a support organization to provide supplies to prisoners’ families for school, Christmas, Easter, etc.  He also became an active member of the local Gideon’s chapter, helping distribute Bibles around the area.  During this time, he worked to become a licensed pastor. Four years after moving, he lost Irene to cancer.  After joining a local grief support group, the Lord led him to meet another wonderful lady, Faye Wood, whom he married the following year.  God gave them 14 blessed years together before Jim was diagnosed with cancer in December 2021.  God took Faye home in January 2022 and Jim followed her just five months later.  His steadfast dedication to service and his spunky sense of humor were his trademarks throughout life.

He is preceded in his death by his by his first wife, Irene Alice Isabella; and his second wife, Faye Juanita Wood; and son, James A. Huff, and four of his sisters, Cathryn H. Bryant, Wilma Webb, Judy Tackett and Karen Cochran, all of California.  He is survived by one sister, Betty James, of California; and one brother, John Huff, of Oregon.  He is also continuing to bless the world through his three children, Janine Rodriguez (m. Scott Rodriguez) of Palm City, FL; Laura Chastain (m. Scott Chastain) of Jupiter, FL and Joel Huff (m. Kimberly N. Huff) of Lynchburg, VA; as well as his much-loved late-in-life children, Roxanne Frey  (m. Mike Frey) of Montclair, VA; Steve Martin (m. Lisa Martin) and Ron Rosenberger (m. Cheryl Rosenberger), both of Lynchburg, VA.  He is also survived by 13 grandchildren, and 6 great-grandchildren and countless nieces and nephews across the country.

A celebration of life will be held at 4 p.m. Saturday, June 11, 2022, at Forest Alliance Church in Forest, VA with a family interment to follow Saturday, June 18th at the Royal Palm Memorial Gardens in West Palm Beach, FL.

We certainly enjoyed Jim's excitement about sharing the gospel and the love of Christ with inmates and their families We both worked with Jim in Freedom Family Fellowship. Our favorite memories are the Christmas parties for inmates children. Jim always wore his Santa hat as we all did and enjoyed giving the gifts of which he and Faye always had angels from the angel tree whose faces they saw excitedly receiving their gifts, eating cake and singing Happy birthday to Jesus . This is who Jim was to us and how we will remember him. Our sympathy to all the family, we know he will be sorely missed. May your joyful memories bless you and the Lord comfort you always. Min. David and Jennifer Mason

I'm very sorry for your loss. Jim was a good man and I enjoyed talking with him when I visited Aunt Faye and him. He is now with his Lord and has no pain.

Jim Huff was a wonderful man of God who lived his life blessing our Lord. He married my sister Faye and they had 14 wonderful years together. Our family all loved Jim welcomed him with.open arms... Rest in peace Jim. You are truly missed. Your sister in law Jerrie Keys