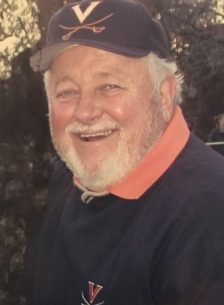 Jim grew up in Charlotte, N. C. before moving to Cape Charles, Va. where he spent the latter of his childhood years, graduating from Cape Charles High School a year early as Valedictorian. He played football, served on the honor committee, became an Eagle Scout, and worked every summer to help provide for his family. His devotion to his family and his faith led him to serve St. Charles Catholic Church as an altar server for many years. His love of Cape Charles had a tremendous impression on his life and he had many childhood friends on the Eastern Shore with whom he remained close throughout his life.

Jim was awarded a scholarship to the University of Virginia where he received a Bachelor of Science degree in Business Administration in 1955. Adjusting to the shift from his small community in Cape Charles, he began his tenure at UVA quite innocently selling rosaries to earn extra money. While going door to door, he knocked on the door of Phi Gamma Delta Fraternity and knew his rosary selling days were over. Upon joining as a member, he met and gained many loyal life-long brothers. Those years formed the foundation for his love and devotion to the University of Virginia that he passed down to his family. He remained an active alumnus and supporter of the University over his life.

After graduation, Jim was a Captain in the US Marines. He was stationed at Camp Lejeune where he met his bride, Nancy, on a day trip to Morehead City. Together they had and raised five children, living mostly in Raleigh and Charlottesville. Jim worked many years in sales. He found success in his ability to capture the attention of a room. Jim received many awards for being the top producer for Massachusetts Mutual Life Insurance Company. Inspired by awards trips, Jim and Nancy began to seek out their own travel. They visited Ireland, the Holy Land and other places that they would hold dear to their hearts for their remaining years. Jim ended his career as a Chartered Financial Consultant for Godine, Nesbit, and McCabe in Charlottesville, Va.

Jim’s work ethic was instilled in his children and his many sacrifices enabled them to participate in life’s offerings. These ideals would be passed down to the next generations as well. Jim was always quick to ask his family for updates on their lives and found special interest in their professional endeavors, often giving meaningful and sound advice. Throughout his career, a sign on his desk read, “There is no limit to the amount of good you can do if you don’t care who gets the credit.”

Jim, like Nancy, believed family was first. Above all of his professional accolades, his greatest pride was being a father, and eventually, a grandfather and great-grandfather. He loved all his family members and relished being with them. Jim valued keeping traditions and celebrated the holidays and his family’s milestones to the hilt. He was present at countless sporting events, horse shows, recitals, etc. and shared his support in all ways. Jim lived and shared his heritage with his family. He was a devout Catholic, was proud of his Irish roots and was the ultimate gentleman and Virginian.

Jim was an avid sports fan of all things UVA and hosted endless tailgates at Scott Stadium. He was always surrounded by friends, family, and Wayside chicken. He often saw fellow fans walking by and welcomed them over to tailgate as family. He shared his love of the Boston Red Sox with his family, taking many trips to see the Green Monster. Sunday football was always dedicated to the Washington Redskins. He was sure to stay up to date on all athletics of the colleges and universities attended by his children and grandchildren and rooted for them (as long as they weren’t playing UVA!) To see his love of these teams is evidenced by all the team paraphernalia worn by his family! Go Hoos!

We will always think of our dad while at the beach, camping in the mountains, spending time with the VA Beach McCabes and the Miketas, going to a UVA game, drinking a peachy weachy, spending time in Cape Charles, listening to Neil Diamond, carving the Thanksgiving turkey, celebrating the holidays and being at Mass on Sundays. Jim was an avid storyteller, often being caught repeating stories to his many and varied circles of friends throughout his lifetime. When called out by his audience, he reminded them that “you only kid the people you love”, and Jim had much love to give.

Celebrate James's life with a short message, photo or video!

May God's love bring the McCabes family comfort and peace during this difficult time.

Jim McCabe was an amazing man. My earliest memory of University of Virginia is that as a little kid tailgating at McCabes.!Through the years their parking spot became the place where we all met. Who couldn’t forget that wayside chicken. I am struggling as I write this to get through it without crying. Our thoughts and prayers go out to the whole family. Jim McCabe was a special human being. He loved his Hoos. He was a wonderful man. He will definitely be missed.