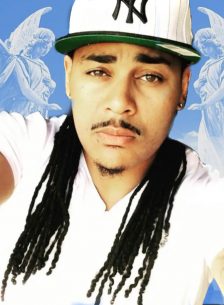 Growing up Julius was very passionate about his sports and teams. Julius grew up in Nelson County playing on the football team through graduation. Julius earned the honor of all state and all conference, gaining these earned Julius a scholarship to VSU to follow his dream. Julius’ love for football lead him to a scholarship to Virginia State University to continue his dream.

Julius often wanted peopled to see himself as the alpha male constantly challenging his Uncle Dalton and Brother Jonathan for strong man of the family. So many would not have known he had a kinder, caring, and funny side. Julius enjoyed making jokes and poking fun at no harm.

Julius was inspired to be a rapper and performer creating his own music he wrote some local hits, that he and his friends promoted very strategically. Julius never gave up on his career or dreams, just moved beyond some and made more. Julius had dreamed of creating his own business and making his stance in the trucking world. Julius worked long tireless hours to continue to make his end meet. When Julius wasn’t out on the road, he enjoyed his time with his family and friends. Julius was a gloating father that was inseparable with his kids. Julius often referring to his daughter Carina as his queen and Jacobi, his son, as “lil stick man”.

A celebration of life service for Julius will be held Thursday, December 8, 2022 at 11:00 am at Calvary Baptist Church, Lovingston. Interment will follow in White Rock Baptist Church Cemetery, Arrington.

Celebrate Julius's life with a short message, photo or video!

R.I.P Julius, from the Nelson County Football Family. You touched so many lives and was always one of the great ones. Prayers go out to your family.

R.I.P Julius! Gone too soon. Prayers to family and everyone he touched in life.

Posted by Michael Turner on December 8, 2022

I met Julius when we worked together at Bdubs years ago. He was always very kind and genuine to me. His smile lit up a room. He will be missed. My condolences to his family. I will be praying for them.

My brother! I'm going to miss you man. Thank you for always being a great friend. Love you brother.

Rest up King, you will definitely be missed😭❤️ gone entirely too soon!! Prayers for the whole family!!

Posted by LaWanda Megginson on December 6, 2022

Rest up King, you will definitely be missed😭❤️ gone entirely too soon!! Prayers for the whole family

Posted by LaWanda Megginson on December 6, 2022