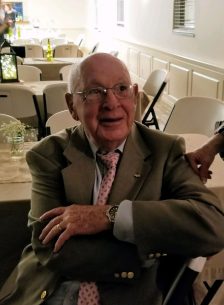 Lacy Evan Moyers, 94, of Lynchburg, VA passed away peacefully at his home on September 24, 2022 surrounded by his family.

Mr. Moyers was born on October 19, 1927 in Franklin, WV and was the son of the late Martin Hugh Moyers and Gertrude Mauzy Moyers Simmons.

He was a member of the National Guard. He retired from Peoples Security Insurance Co. after 36 years where he was Agency Manager and Home Office Field Auditor. After retirement, he drove cars for Avis for nearly 30 years.

He was a member of the Pendleton Lodge #144 AF & AM, 32nd Degree Scottish Rite Master Mason, and Kazem Temple of Roanoke, VA for 50 years. He was past president of Lynchburg Life Underwriters Association and twice past president of the Lynchburg Shrine Club.

His loving wife of 56 years, Loretta June Crigler Moyers preceded him in death in 2007. He was also preceded in death by three brothers; Maurice, Leslie and Harlan Moyers, and two sisters, Cornelia Grace Moyers and Louise Rexrode.

He is survived by the pride of his life, his five daughters and their families: Terry Mason (Joe) of Marietta, GA, Denny Harrell (Hogie), of Midlothian, VA, Sherry Homan (Morris) of Moorefield, WV, Kim Crist (Steve), Green Cove Springs, FL and Susan Smith (Chuck) of Lynchburg, VA. He was the best granddaddy to eleven grandchildren and twenty great grandchildren . He also leaves behind a special friend, Dorothy Dodson.

Paster Dennis Roberts will conduct the funeral at 1 PM on Monday, October 3, 2022 at Holy Trinity Lutheran Church in Lynchburg. Visitation will be 12 to 1 PM at the church. Burial will be at Fort Hill Cemetery in Lynchburg, VA with Masonic Rites.

The family wishes to acknowledge Heather and Lee Younger along with Gentle Shepherd Hospice for their love and dedication to our father.

Memorial donations may be directed to the Shriners Children’s Hospital, Gentle Shepherd Hospice, or Meals on Wheels.

He was a faithful, honorable, gentle, humble and kind soul who leaves behind a legacy of love.

Denny and Terry, My deepest sympathy to you and your family. Love the Blessings and cherish the memories, Vic Bosiger BHS Classmate

Posted by JoAnn Harrington on September 28, 2022