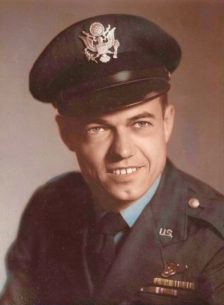 Larry was born in Paterson, New Jersey, March 24, 1925, son of the late William George Rothe and Lillian Disch Rothe, of Teaneck, NJ. He was married to the late Louise Becker Brinkerhoff Rothe.

He graduated Teaneck Public High School, Teaneck, NJ in June of 1942, then Enlisted in the US Army Air Corps in February 1943. He Graduated Advanced Navigational School, Monroe, LA, and was commissioned as a 2Lt, awarded Navigator’s Wings on November 25, 1944. He was on Active-Duty July 1943 to October 1946.

Served in the Asiatic/Pacific Theatre, Marianas Islands June 1945 to October 1945 as part of the Occupational Air Force of Japan.

He was a  reservist for most of his life. He was a middle school teacher, then guidance counselor, then principal and finally superintendent of schools all at Rochelle Park Schools . He had a masters degree from Montclair State University. He offered one of the first programs for emotionally disturbed students in NJ in his school at Rochelle Park, NJ.

Recalled to Active-Duty May 1, 1951, was assigned to the Strategic Air Command at MacDill AFB, F1, flying in B-29 Aircraft and was released from Active duty in 1953. Col Rothe Served during WWII, Korea and Vietnam. As a Career Officer in the United States Air Force, formerly known as the US Army Air Corp, he was on Active Duty during wartimes and throughout the rest of his Military Career he flew all around the world on Tours of Duty, Military Campaigns and continued in the Reserves for 27 years of Faithful Military Service and Retired with Honors as a Lt Colonel in 1983. He became a private pilot and opened “Rothe Aviation Inc” where he gave flying lessons and taught Ground School. He was a faithful member of New Life Assembly of God Church in Farmville since 1983, He served 20 years as a teacher of an adult class, 15 years as a Trustee and was a Leader for Youth Ministries. He performed in every musical and served in many capacities including Sunday School teacher of the Prime Timers. He was also a Gideon and performed Bible presentations. Member of MOAA and many other organizations.”

“GOD has been good to me and blessed me to come home victoriously after every tour of duty. Sad to say, I lost most all of my comrades during those times.”

In addition to his wife, he was preceded in death by his son, Russel Sanborn; a sister, Lillian Elizabeth Smith, a brother Franklin Rothe, and nephew, Stanley Drinkwater; and niece, Linda Smith Cashion.

Funeral service will be conducted at 1 p.m., Saturday, August 20, 2022, at New Life Assembly of God Church, Farmville, Va. Interment will follow in Trinity Memorial Gardens, Rice, Va.  The family will receive friends from noon until 12:45 on Saturday at the church.

The family offers a heartfelt thank you to all those who cared for Larry.

In lieu of flowers, memorial contributions may be made to, New Life Assembly Church, 9 Mahan Road, Farmville, VA 23901.

We are praying for your strength and sending love.