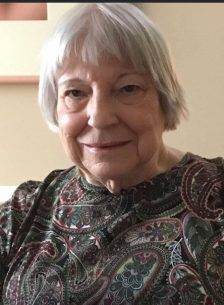 Nancy Kathleen Poff Button was born December 13, 1938, above a Detroit drugstore to two Arkansas farmers who’d moved north for a job promised in a letter signed by Henry Ford himself. She died March 6, 2022 at Lynchburg General Hospital after a battle with septic shock and heart failure, searching for her own way to God. She died just nine weeks after the funeral of her husband of 53 years and best friend, Robert “Bob” Lockwood Button, without whom life just wasn’t as bright. She was preceded in death by her parents, Henry and Fern Poff, sister Pat Barrow and brother-in-law Don Barrow, and her beloved dogs Fifi, Pippin, and Shadow.

She is survived by her daughter Kristin Button Wright and son-in-law Frank Wright of Brookneal, Virginia, her son Geoff Button and daughter-in-law Kari Sorenson of Skokie, Illinois, and her three much-loved grandchildren, Austin Wright, 17, Matthew Wright, 16, and Audrey Button, 3. She is also survived by her niece Kim Barrow of Redford, Michigan, her nephew Doug Barrow and wife Sarah of Fort Wayne, Indiana, her sister-in-law Judy Oswood of Marshalltown, Iowa, her brother-in-law Jim Button and wife Linda of Effingham, Illinois, and her cousin and childhood playmate David Casteel of Dallas, Texas.

Nancy grew up in Detroit and graduated from Cooley High School, going on to obtain her bachelor’s degree from Western Michigan University in Kalamazoo in 1961, and later her masters’ degree from the University of Illinois at Champaign-Urbana. She taught English for fifteen years at Muskegon High School, Muskegon, Michigan and at Grosse Pointe South High School in Grosse Pointe Farms, Michigan. She taught college courses at Wayne County Community College and Marygrove College in the Detroit area.

Later, she worked in fundraising for the Detroit Historical Society, the Girl Scouts of the USA, and Camp Holiday Trails. After she moved to Charlottesville, Virginia, in 1995, she volunteered her time as President of the local chapter of the League of Women Voters and held almost every office in the PEO. She died without ever revealing what those letters stand for.

She loved following the news, eating sweets she knew she wasn’t supposed to have, sneaking a glass of red wine before bed, reading books made of paper with a dog curled up beside her, telling her daughter her hair looked better “the way you used to have it,” falling asleep in front of movies, voting, critiquing her son’s facial hair, riding safely in the passenger seat on Skyline Drive, singing to Broadway musicals in the car, binging The Good Witch, Anne With an E and Aurora Teagarden, ordering things from catalogs, encouraging her children to do great things, and, always, her husband, Bob. His name was her last word.

A service honoring her memory through the music she loved will be held Saturday, March 19, 2022 at 1:00, p.m. at Tharp Funeral Home, 220 Breezewood Drive, Lynchburg. In lieu of flowers, please consider a donation to the League of Women Voters or order something random from a catalog for someone you love. She’d have liked that.

Celebrate Nancy's life with a short message, photo or video!

It is with great respect and a fondness for her helping hands and big heart that the League of Women Voters of the Charlottesville Area will remember Nancy Button. We send our heartfelt condolences to her loved ones in this time of grief.

Posted by Pat Cochran, President, League of Women Voters of the Charlottesville Area on March 15, 2022