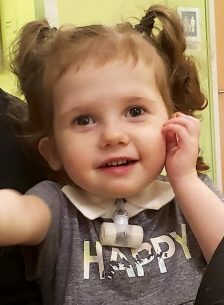 Naomi Faith Prosper, age 3 years, of Lynchburg, went home to be with the Lord on Thursday, August 25, 2022.

She was born on Sunday, November 25, 2018, at UVA Children’s Hospital in Charlottesville, Va. She was the daughter of Joshua David Prosper and Shelby Anne Prosper.

Naomi Faith Prosper was born a fighter. We often called her our warrior princess because she faced more challenges in her first year of life than most people face in their entire lifetime. She fought through every battle with a smile on her face. She was the sweetest, most loving little girl, but underneath she was tough as nails.

Making others laugh brought her so much joy. If she was able to make you smile she repeated the action because she liked to make others happy. She was always willing to wrap her little arms around your head or neck in a loving embrace and, if you were lucky, she’d also give you a kiss on your forehead or cheek.

Naomi was a natural bookworm. She would often be found with a book in her lap, turning the pages. “Pete the Cat” was her favorite series; “I Love My White Shoes” and “The Five Little Ducks” were her favorite books. She always wanted to cuddle up with Mommy or Daddy or both and read her books. She would sign “again” as soon as the book was done and we would read it as many times as she wanted.

More than anything, Naomi loved playing in the water with all her rubber ducks. She lived her joy when she was splashing everyone around her. She was a playful spirit and could make a toy out of anything; a shoestring was used as a lasso, scraps of paper were make-believe books, and she was fascinated with spinning coins and Daddy’s wedding band.

Naomi was a child of light. Fireworks and sparklers, string lights, light up buttons on electronics, and light reflecting off the shiny floor at the grocery store; they were all fascinating to her. String lights that changed colors were wrapped around the posts of her crib in the NICU and lights were hung up year round at home for every holiday. Sparklers always brought fits of laughter and squeals of delight. She got to hold one once which she threw right into Daddy’s lap and burned a hole in his pants; Naomi thought it was the funniest thing ever.

Evening was her favorite time of day. Daddy would come home from work and scoop her up. He was often greeted with hugs, kisses and giggles. Naomi would bring him either a book or toy that she wanted to share with him and the two of them would be content in each other’s company until she heard the bath water running. The sound of her laughter would fill our home as she’d pick up her rubber duckies, one at a time, and throw them into the tub. We often joked that she believed she was a beluga whale because most of the bath water ended up on the floor from all her splashing. After her bath, Mommy would brush her hair and sing to her or put on an episode of “My Little Pony.” “Fluttershy” was Naomi’s favorite. Dinner was always exciting for her. We were always trying to introduce her to new foods to teach her how to eat and she loved her Pediasure. At bedtime, Naomi would snuggle in with Mommy and Daddy to read her favorite books, make shadow puppets or watch her favorite movie Muppets Treasure Island.

Naomi brought joy and inspiration to all who were blessed with her presence, although she had endured more than most in a lifetime – being medically complex she lived by her own rules. Naomi had a captivating smile and presence that brought people from across the world together in prayer. She motivated and inspired others to live better lives. She is deeply loved and missed as she dances on starlight with the angels.

The family will receive friends on Wednesday, September 7, 2022 at Tharp Funeral Home, Lynchburg from 5 to 7 p.m. A Funeral Mass will be held on Thursday, September 8, 2022, at St. Thomas More Catholic Church at 11 a.m.

Celebrate Naomi's life with a short message, photo or video!

Naomi I made this picture for your parents. I love you and will miss your smiling precious face.You were my Special Little Friend and I will cherish the times I played with you in the yard. I know your Angel Wings are just as Beautiful as you are.🙏🙏❤️

Posted by Dianne Stedman on September 6, 2022

I am absolutely heartbroken . When I saw this on Facebook w I was almost in denial . That little angel went through so much and was such a beautiful and brave little girl. Shelby and Josh I cannot tell you how sorry I am . I am praying that Naomi is happy with the Lord as a little angel .

Rest easy, now, dear sweet courageous little Angel, Naomi. You were faced with so many challenges and you overcame most of them. May Our Lord’s hands envelop you in Love and May He give your family Peace and Faith. We love you.

Posted by Aunt Chris and Uncle Jerry on September 1, 2022