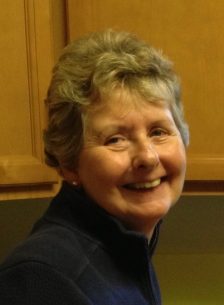 Patricia A. DiEgidio, “Patti”, 80, originally of Indiana, currently of Lynchburg, VA but resided for many years in Florida (Stuart, Davie, Pemebroke Pines). Died at home on Monday, June 27, 2022.

Patti was born at Methodist Hospital in Indianapolis, Indiana. She was pre deceased by her father, Paul Curtis King, mother, Frances A. King, and brothers, Emil and Curtis.

She attended Arsenal Technical High School in Indiana and Broward Community College in Florida and graduated in 1984 with an AA degree with Highest Honors.

Patti worked within the South Florida School System for many years and retired in November 2000 from The School Board of Broward County Florida as Office Manager and Principal’s Secretary.

Patti leaves behind her husband, Howard A. Johnson Jr., 88, of Lynchburg, VA. Married December 1, 2016 and together since 1994.  They had both lost their previous spouses to cancer within 5 months of each other and began corresponding while grieving. Also survived by sisters- in-law: Diane M. King and Cheryl King, Niece: Jennifer King Uminski(Doug), Nephews: Emil King Jr., Michael King(Andrea), and Step children: Theresa Egan(Charlie), Dawn DiEgidio, Albert DiEgidio(deceased) (Mary), Mary Beth Morton(Mike), Louis DiEgidio(Joanne) and Joey Infield, and numerous grandchildren, all of NJ. Lori Johnson(Beth Hawley) and Ricky Johnson of VA. Patti was a member of the Daughters of the American Revolution, Halpatiokee Chapter. She was a Master Gardner of Martin County, FL and a member of the Garden Club of Stuart, FL. She always loved traveling, gardening, researching genealogy, Bunco and movies as well as spending time with family and friends.

A special thank you to the dedicated and caring staff at

Liberty Ridge who cared for her as if she were one of their own family, especially the team on the second floor. We cannot thank you enough for your hard work and kindness to “Pinky”.

If you wish to make a donation in her name consider:

Patty was such a pleasure and a happy smile to see each and every day. Her humor and quick wit will be missed deeply. Her smile was contagious and her laugh was infectious! She will be missed. Our prayers and condolences to the family during this hard time!

We will miss her smiling face and witty comments! Prayers for Mr. Johnson and family during this difficult time.❤️🙏🏼

Posted by Alicia Blankinship on July 6, 2022

Patty, or Patti-O as I lovingly called her will always be remembered by me as one of the sweetest women I know. She was married to my dad (Albert DiEgidio), but was more of a friend than a stepmom. When she started dating Howie, we immediately accepted him as one of our own, too. I called him Howie2. Although there were miles between us, New Jersey to Florida, we were always in contact with each other, by phone, FaceTime, and an occasional trip. Rest in peace my friend. You will always be missed. ❤️