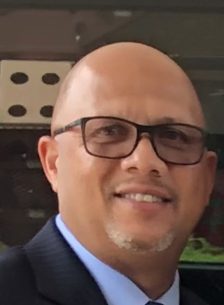 He was born and raised in Big Island, Virginia. He accepted Christ at an early age and joined the Sharon Baptist Church in Big Island, Virginia. He received his formal education in the Bedford County Public School system. He was a LOVER of all sports; played basketball and baseball in high school and had the honor to play in the Little League World Series as a member of the Virginia State Championship team. After high school, he enlisted in the United States Army and received the highest rating in physical training among the platoon. He was an expert marksman and served his family and country with distinction and honor.

He was preceded in death by his mother, Patricia Ann Pullen Reynolds.

Reggie enjoyed life and had a smile that could melt your heart. He never met a stranger. In the midst of all the chatter at family gatherings, his “jovial” laughter was easily identified. He is already greatly missed by family, friends, and everyone who has ever crossed his path.

A celebration of life will be held on Saturday, January 28, 2023, at 12:00 pm at The Ramp Church International in Lynchburg, Virginia. A visitation will be held one hour prior to the service starting at 11 am. Military honors will be provided by Fort Lee Active-Duty Personnel.

Our heartfelt condolences to the family. May the Love of God flow throughout this family and heal your brokenness. God bless …. This is the hardest thing I have had to do. I will not say goodbye, until we meet again my angel. Life will never be the same. I love you forever

Selena, My deepest condolences.May God fill you with peace, strength & comfort.Sending you love at this unforseen time.I will be keeping you & his loved one\\\'s in prayer.

Reggie was the best of all of us. I have never met a more positive man in my life. He is the only person I know that every experience was a great one. I don’t have a brother but I certainly feel I have lost one, I love Reggie and will miss him every day.

Our prayers and condolences to all the family. Praying for your comfort during these difficult times.

Our prayers and condolences to all the family. Praying for your comfort during these difficult times.

Selena, may every thought you have of Reggie, your soulmate, be filled with the love you both shared with each other. Let the joy you felt whenever you looked at him, that everyone around you could see, be within you forever. If you ever need us for anything, we are here. Love you much.

Posted by Russell and Janice Christian on January 25, 2023

Reggie will be deeply missed. He always had a smile on his face and was just an all around great guy. Loved working with him and always appreciated his work ethic and sense of humor. My Prayers and condolences go out to his family. He was a good and kind soul. God Bless.

Bobby and Judy, it was awesome seeing you both last week you seem so happy, not knowing that your heart was about to be broken. You have my deepest sympathy. 🙏🏽❤️🎈

I was in disbelief when I heard about Reggie. He was such a great guy. I am praying, and sending my condolences to the family. I pray that God gives you some type of understanding. 🙏🏼🕊️

We would like to extend our condolences to Selena and our cousin Bobby and his wife Judy. Our prayers are with the entire family in this time of bereavement. God Bless. Beckie Parker Johnson, Metron Parker and Stavros Parker

Words cannot express the pain I know you're feeling. But know that God's got your back. Love you! At JFs 50th Anniversary, we hadn't seen each other in over 30 years. We laughed, talked about the old days and how much things there had changed. It was just like no time had passed. You bonded with my husband over the 49ers and when I told him you had transitioned, he said "we'll win for him." Well, they did! We talked about your wife and daughters and how happy you were. We promised to see each other again and we will, just not here in our earthly home! I pray comfort, strength and healing for your family, co-worker's and friends because I know the impact you had on their lives. Well Done My Good and Faithful Friend!

I was saddened to hear about Reggie. Sending my condolences to the family and pray that God gives you the strength you need to get through these difficult days…🙏🏾❤️

Selena We are saddened to learn of the passing of your beloved husband Reggie. We are sending love and condolences in the difficult days ahead hoping your sweet warm memories will bring comfort to you and the family. "Blessed be God, even the Father of our Lord Jesus Christ, the Father of mercies, and the God of all comfort." 2 Corinthians 1:3.

Prayers of comfort peace and strength for all the family

For the entire family & extended family, I send prayers of healing and comfort to help through this challenging time. Reggie had a kind soul and a smile for everyone. He will be missed!

I am so sorry for your loss. My thoughts & prayers are with you. Reggie was such a kind soul. Your memories will carry you through & will last forever.

Wishing you peace to bring comfort and the courage to face the days ahead and loving memories to forever warm your hearts. "Blessed are those who mourn, for they will be comforted." Matthew 5:4

Bobby and Judy, I am so sorry to hear of the passing of Reggie. Sending prayers and hugs to you and the family.

So sorry for your loss, sending prayers.

My condolences to Bobby and Judy. Sending Prayers to you and the family. Reggie was my little brother. He was just a kind soul. Funny always smiling. Reg will truly be missed.

Posted by Victoria Hopkins-Walmsley on January 23, 2023

Prayers and condolences to the families.

Bobby and Judy. Sorry for the passing of Reggie.Prayers and hugs for you both.

Bobby and Judy, our condolences 💐 to y’all and the rest of the family. Reggie was a super guy but y’all know that. Hugs and much love.

To Bobby & Judy , sorry for the passing of Reggie. He was the sweetest kindest young guy I know . He always greeted you with a beautiful smile and kind words I will miss you but now you back with your mom. The rest of the family trust in God cause he will get y’all though this. Reggie R.I.P. until we meet again. Love you ❤️