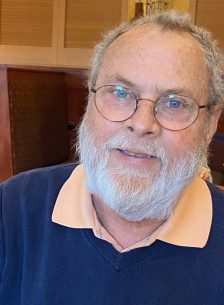 Scott Alan Graham was called home by his Lord on Sunday, January 30, 2022.  Scott was born on November 15, 1959 and is the son of Madeline Graham and the late Robert “Bob” Graham.  He is preceded in death by his oldest brother Robert.

Scott was married to the love of his life, Vicki, for 42 years.  Scott was the proud father of Katie Mehler and her husband Chris; his son Jeff Graham and his wife Lauren; his son Vince Graham and his wife Emily.  Scott loved spending time with his grandchildren: Lily, Elly, Caleb, and Noah Mehler; Silas and Peter Graham, and Emmett Graham.  His home was always full of laughter and lots of fun when the house was full of kids.

Scott is survived by his brother and sister-in-law Greg and Leslie Graham.  He is also survived by his father-in-law, Rev. Lenn Lloyd, brother-in-law Gary Bond, brother and sister-in-law, Heath and Rachael Lloyd, and sister-in-law, Marijo Lloyd.  Scott loved his nieces and nephews as much as his own children and they will surely miss their Uncle Scott:  Hannah, Clair, and Lucas Lloyd, Jonathan, Zachary, and Judson Lloyd, Donnie, Haylie, and Jay Graham and the little ones Mason and Graham Ogden and Piper Graham.  Scott was blessed to have a devoted extended family including several special aunts who were always there for him during his illness.

Scott was a member of Leawood Baptist Church.  Scott retired from Prestige Pharmaceuticals (formally known as C.B. Fleet) after 42 years of service.

Scott was an avid golfer and missed the sport immensely during his illness.  Scott loved the beach and had dreamed of retiring at Myrtle Beach to play golf.  Who knows, there might be a golf course in Heaven?

The family would like to express enormous gratitude to Dr. Stefan Gorsch, his nurse navigator Cindy Hunter, all of the staff at Alan Pearson Cancer Center, and the doctors and staff of the UVA Dialysis Center.  Scott was so blessed by the many health professionals in Lynchburg and UVA who cared for him during his illness.

There will be a service to celebrate Scott’s life at 2 p.m. on Wednesday February 2, 2022, at Tharp Funeral Home, Lynchburg.  Rev. J. Heath Lloyd (Scott’s brother-in-law) and Pastor Mark Cheatham will officiate the service.  Visitation will be held one hour prior to the service and at other times at Scott and Vicki’s home.

There will be a service to celebrate Scott’s life at 2 p.m. on Wednesday February 2, 2022, at Tharp Funeral Home, Lynchburg.  Rev. J. Heath Lloyd (Scott’s brother-in-law) and Pastor Mark Cheatham will officiate the service.  Visitation will be held one hour prior to the service and at other times at Scott and Vicki’s home.

Celebrate Scott's life with a short message, photo or video!

Vince and Family, so sorry for your loss. Our thoughts and prayers are with you and your family in this time of sorrow. May you all find comfort in knowing that he is with Jesus....I can only imagine the celebration!

Vicki and Family, So very sorry for your loss, my thoughts and prayers are with you

Posted by Barbara Mitchell on February 2, 2022

Scott was a wonderful person who will be deeply missed. I worked with him many years at Fleet. You and your family are in my thoughts and prayers as you grieve his loss.

Posted by Maryann Carroll on February 2, 2022

Dear Katie, Chris, and all the Graham family, I am very sorry to hear of your loss. Please accept my sincerest condolences and know that you're close in my thoughts and prayers.

Scott was a great person and friend, we played golf in the mens league and had a great time. Yes I believe there is a golf course in heaven. I pray for the family and you will be missed

I am so sorry to hear about Scott's passing. We worked together and played golf together for many years. He was truly a great friend, father, golfer and all around caring person. My thoughts and prayers are with him and the family. He will be truly missed.

This is Lisa from the airport. I am sorry to hear about your son Scott you had told me that he had cancer before Robert passed. My prayers are with you and your family at this time. FAITH IN GOD KEEPS US STRONG AND SEES US THROUGH ALWAYS

It was so sad to hear of Scott’s passing . I enjoyed working with him many years. I really enjoyed the time with him at the fleet retirement Christmas dinner. Praying for the family.

I was so sad to hear of Scott’s passing. I enjoyed working with him many years. I enjoyed the time with him at the fleet Christmas dinner. Praying for the family.

Vicki ,I am so sorry to hear of Scott's passing ,I worked with Scott many years at Fleet.He was a great friend and mechanic .I pray for you all in days to come .sending prayers

Posted by Sherry Wisecarver on February 1, 2022

I worked with Scott for 35 years. He even helped train me when I came to Fleet. I will always remember throwing the frisbie during dinner break while we were on 2nd shift. He was always a joy to work with and I will miss him. My thoughts and prayers go out to the family.

Scott was a co-worker he was a wonderful man a hard worker very nice person loved talking about his family .he will be missed fly high Scott. My heart and prayers go out to his family

Posted by Sharon Jenkins on February 1, 2022

Scott was a co-worker he was a wonderful man a hard worker very nice person loved talking about his family .he will be missed fly high Scott. My heart and prayers go out to his family

Posted by Sharon Jenkins on February 1, 2022

Thinking and praying for you all at this time.Scott was a wonderful person. He always had a smile.worked with him for years He always was willing to help you .He will be missed.

Thinking of you all I am so sorry for your loss Scott was a good friend and co worker for many years he was a great man my thoughts and prayers are with all of you.

Dear family, It is so sad to hear the news of Scott’s passing. I know how wonderful he was to all of you. Scott was a very special husband, Father, son and Poppy. He gave it his best to stay as long as he could. He will not be forgotten because those we love are part of who we are and stay with us always. Sending love and wishing you comfort now and later . Susan Kepler and family

Vicki, Madeline & family: I am so sorry for your loss, he was a great cousin and friend to many may God give you strength in the difficult days ahead; Katie I know you were his saving grace on earth. He loved all his children and grandchildren, Scott you are no longer suffering.....you earned your angel wings fly high Diane & Joseph Arrington

Scott was a great co-worker and friend. So sorry for the family's loss and prayers for you all.

Thinking of each of the family members with a heart full of sympathy and love. ♡

I am so deeply sorry for your loss. I know Scott fought hard and you are so proud of him. May peace and comfort come to you, especially on the days that you think you can’t go on. Prayers for your family. ❤️