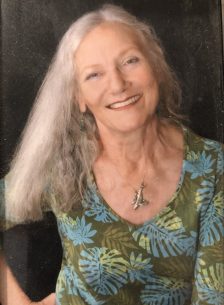 Victoria (Vicki Landfear) Forrest, age 78, passed away November 2nd at Heritage Green Nursing home in Lynchburg, Virginia after a long struggle with Alzheimer’s. Vicki was born in Troy, NY May 9, 1945 and graduated from Troy High School in 1962. She attended Syracuse University and Russel Sage, graduating with honors from University of MD, Heidelberg Germany in 1969, with a major in English and minor in German. She was a member of Alpha Sigma Lambda, national scholastic honorary fraternity.

Vicki was intellectually curious and cared deeply about others; her rich life reflects that interest in the world around her and passion to share it. She and her husband, Robert (Bob) Forrest spent four years early in their marriage in Germany, which is where she discovered her passion for travel. Since then she has visited cities and towns all over the US and around the world.

Vicki was enthusiastic about language and encouraged a love of language and reading in others. She taught English at Jefferson Forest High school in 1972 and German and English at Brookville High School in 1973. She also volunteered with the adult literacy program in Lynchburg. When playing Scrabble, she took more joy in using great words than in winning, though she was tough to beat.

She cared deeply about others and devoted much of her free time to supporting those who needed a little help; she spent many years volunteering with Teen Parent programs, worked in mediation and with Campbell County Social Services as a parent aid. Through these programs she made lasting impact on the lives of many people in the Lynchburg area.

Interested in everything, Vicki also spent some time as a Real Estate Agent and fifteen years as material control manager at Aerofin. She sang in the Sweet Adelines for several years and was involved, with various other members of the family, in theatrical productions at the Lynchburg Fine Arts Center.

When Bob partnered with others to start Communications Technology Associates (CTA) she played a strong supporting role, as a bookkeeper and technical writer. This relationship gave the two of them the chance to travel together, extending business trips into explorations of the vicinity.

Vicki was an avid skier (and anything else outdoors), which created more opportunities for travel. She skied well into her 70’s, and, as was her nature, helped others as a Mountain Guide – assisting those who had lost their way or were injured. She loved everything about being outside – she was a skilled gardener and adored all things animal (with the definite exception of snakes). It was not unusual for her to while away a full morning enjoying the antics of the birds in her bird feeders.

Anyone who knows Vicki well will remember her laughter above all. She had a vivid sense of humor and could see the comedy in any situation. Every day spent with her was brightened by smiles.

Vicki is survived by her husband, Bob Forrest of Lynchburg; Daughter, Cindy Forrest of Redmond, WA; Son, Kit Forrest of Richmond, VA; and sister, Jane Caspar of Boyce, VA. She was preceded in death by her parents, Earl and Victoria Landfear of Troy, NY.

Memorial contributions may be made to the Alzheimer’s Association.

A memorial service will be conducted 11:00 am Saturday, November 19, 2022 at Tharp Funeral Home Lynchburg Chapel.

To Uncle Robert and cousins Kit and Cindy, I am so sorry for your loss. Wishing you peace, comfort, courage, and love at this time of sorrow. My heart goes out to you at this difficult time.

Please accept our heartfelt condolences in the recent passing of our dear friend, Vicki. We have such fond memories of fun times on the mountaintop- quiet dinners, lovely Westridge Rd. Hikes, mountain Guide duties. Vicki was a special lady. A loyal wife and helpmate, an intelligent lady passionate about social justice, a language scholar, a world traveler. Her smile could light up a room and her sense of humor was a delight. We shall miss our good times, friend. Rest in peace. Lori & Mike Pancione

As I read with interest Vicki's lovely obituary, I remembered her graciousness and welcome to your home for CTA gatherings. I send my sympathy and understanding of you loss.

Sincerest condolences to Bob and Vicky's family. I remember Vicky's good humor, caring attitude during the CTA gatherings at the house and parties you all held. Keep the good memories of Vicky close to your heart.

Posted by Paul Jasiewicz on November 4, 2022

To the family of one of my dearest high school friends. I remember when Vicki and Bob were going together, a love that has endured for so many years. Love you you, Bob. You endured, and Vicki will bless you for eternity. Thank you Cindy, for keeping me informed.

My Aunt Vicky was and always will be one of my favorite people. When my brother, Alois, and I were growing up we always looked forward to seeing Vicky. She protected and informed us of the grownup world much to our delight. We were all fans of rock and roll; nothing better than Vicky bringing out her carrying case of 45s for our listening and wild dancing pleasure. Bob and Vicky were too cool! I got to paddle a canoe during a visit with the young couple. Memories of Vicky are all so good and wonderful. All the memories are centered on laughter, lots of it. Vicky I miss you. Bob, Cindy and Kit I wish you well.

Bob and family, Please accept my deep condolences for your great loss. I was honored to be a student in Vicki's English class 1972-73 and to visit you both in your home. She was a strong supporter of our senior class and remains well remembered.