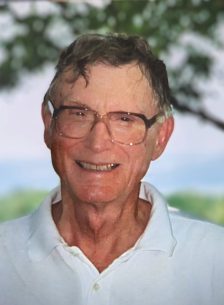 William Albert Kern, Jr, MD, of Smith Mountain Lake, Virginia, died on January 20, 2023, aged 91, with his family at his bedside, in Lynchburg General Hospital, Lynchburg, Virginia, shortly after a stroke.

Bill was born on March 24, 1931, in Buffalo, NY, the only child of William A. Kern, Sr., a president of Rochester Telephone Corporation, and Elin Ohlson Kern. He grew up in Rochester, NY, and graduated from Irondequoit High School and Colgate University. He next attended the University of Rochester School of Medicine, where he met his future wife, Kathryn (Kate) Eustance, a fellow medical student and one of five women in his class. They married in 1955, graduated in 1956, and began their post-graduate medical training in Minneapolis, MN, where their first child, Jenny, was born. The family then moved to Fairfax, VA, where Bill served as a captain in the US army, and worked as a medical officer at Fort Myer, and where daughter Emily was born. The next move was to Syracuse, NY, where Bill finished his residency in Internal Medicine, and son John arrived. In 1962, the family moved to Greece, NY, a suburb of Rochester, where they lived for 34 years. Bill established a busy solo Internal Medicine practice, and worked out of his home office for thirty years, and was a talented and caring physician. He was active in the Monroe County Medical Society, serving as president and as a delegate to the State Society. He was also president of the Rochester General Hospital Medical Staff, and served on the Board of Genesee Valley Blue Shield for 25 years. He was a Fellow of the American College of Physicians.

Bill retired from private practice in 1992, and in 1995 he started a new phase in his medical career, working as a locum tenens physician. He worked until age 84, taking assignments in New York, Virginia, and many for the Indian Health Service Hospital in Pine Ridge, SD and Sisseton, SD.

Bill and Kate moved to Smith Mountain Lake, Virginia from Rochester in 1996, where they enjoyed living in the beautiful foothills of the Blue Ridge Mountains. Between work assignments, Bill and Kate became avid world travelers, visiting more than 50 countries. Bill was a volunteer with the Friends of Smith Mountain Lake State Park for many years, clearing trails weekly and staffing the visitor center. Bill also volunteered with the Charity House Tour at Smith Mountain Lake, and for 15 years, he and Kate spent a week annually volunteering on the Cumbres & Toltec Scenic Railroad in Chama, NM. He also served as his neighborhood association president.

Bill was a devoted husband and knew he hit the jackpot when Kate agreed to marry him; they were happily  married for 65 years, and he dutifully cared for Kate as her health declined in her later years. He was known for his intellect, prodigious memory, and for his deep knowledge in many fields, particularly trains and all aspects of transportation, classical music, medicine, science, geography, and history. Not surprisingly, Jeopardy was his favorite show. He had a strong work ethic, and was a generous and loyal friend, checking in regularly with a roster of family and friends. He loved family visits, and he and Kate hosted a family reunion for many years, and enjoyed many trips with their children and grandchildren.

Thank you to the caregivers from Home Instead who allowed Bill to stay in his home, which was so important to him.

Donations in Bill’s memory may be made to Planned Parenthood at https://www.plannedparenthood.org/, or to the Free Clinic of Central Virginia at https://donatenow.networkforgood.org/freeclinicva, or to the charity of your choice.

Dr. Kern was my physician in Rochester, NY for more than 20 yrs., and my parents also. He was the best and spoiled us for any to come in the future. My condolences to his family for they must be very proud of their father, the man and the physician.