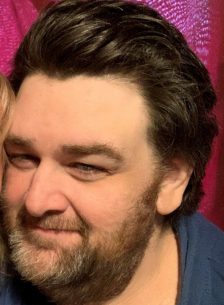 Bill was a great, compassionate man with a huge heart, amazing sense of humor, sharp wit and intellect, and a lover of great music. To live with Bill was to live in a musical or movie. Everything reminded him of a song he would instantly begin singing, and movie quotes were deeply rooted in his memory that he used often. Everyone who knew Bill well knew of his love for the band Queen, a truly devoted fan. He also loved the Killers, the Gorillas, and of course his favorite musicals of all time, Rocky Horror Picture Show, Shock Treatment, and Little Shop of Horrors. Bill often gave credit to his mother and family for his sense of humor. He knew exactly when to use it to lift a person’s spirits. He had a tender heart and he cared deeply for those he loved most and found many ways to express that love often. He was a great cook, also a skill he attributed to his mother. He missed her so much and it brings some peace to know they are united once again in heaven.

Bill was proud of his academic accomplishments. He received an Associate of Arts in Elementary Education from the University of Phoenix and was working towards his Bachelor of Education in Elementary Education through Liberty University. He was so proud to be placed on the Deans List for his excellent GPA every semester he attended Liberty while working on his bachelor’s degree. His lifelong dream was to become a teacher. He was nearing the end of his degree and dreamed of teaching online after receiving his degree with licensure.

He worked hard on his educational goals, but in his down time he also loved a good show or movie and was an avid gamer. His favorites were Final Fantasy, Chrono Trigger, Diablo III, and most recently PGA Golf 2K21. He was greatly looking forward to the Final Fantasy VI Pixel Remaster that was to come out two days after he left this Earth. He collected so many gaming systems and games that brought him endless entertainment. Bill was a huge wrestling fan all of his life and frequently found opportunities to watch the latest match.

Bill loved to bowl, having learned from his grandfather who was a professional bowler. He had started to play again in recent years and was dreaming of family bowling nights and family leagues as he got closer to reaching his health and weight-loss goals. He had worked so hard to improve his health in recent years, having lost over 200 lbs. and was so focused to reach his ideal weight to carry out his dreams.

Bill loved his kitties, Morty (Morty-bud) and Summer (Sum-Sum) and loved giving them constant attention. They came into his life and brought such joy during a really difficult time, and he adored them and looked forward to every interaction and play time he had with them. He also adopted Joey (JoJo) and Honey, as his own, and cared for them both, showing the true animal lover that he was.

Bill cared deeply for his family and friends, and he will be missed tremendously.

A memorial service will be held on April 23 at 2 p.m. in Gloucester, VA, at BridgePoint Church, formerly known as Ebenezer Baptist Church, which was his home church he loved so much.

Good bye old friend. I’m sorry to see you go so soon. I’m thankful you found love before your passing. Til We meet again.

I would like to express my condolences to bills fiance, and to his boys. Bill was a good-hearted man. We will miss him frying our turkeys for us if we wanted one. He was a very good friend to my daughter, Diana and her family. We were looking forward to his dream of being married, and being a teacher. May God bless, and comfort you all. Love, Joanie Robbins