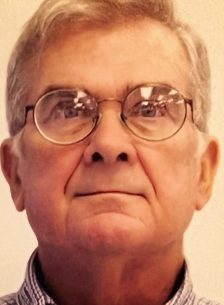 Ernest Julius Kaulfuss Jr 81, of Huddleston, Va – beloved husband of Mary E. “Molly” Kaulfuss for 58 years, died peacefully from complications of diabetes on Wednesday, February 16th in Roanoke, VA –  still steadfast in his opinion that ketchup does not belong on hot dogs, mustard doesn’t belong on hamburgers, and martini’s are made with gin, not vodka.

Ernie started his career as a collector in the Budget Plan in Delaware and Pennsylvania – a job that molded his beliefs on savings and debt for the rest of his life.  After earning his MBA, he and his family moved to the Washington D.C. area, ultimately settling in Silver Spring, MD, where he began working for the Federal Government in the field of auditing, first for the General Accounting Office, then the Office of Inspector General/Veterans Administration, where he retired.  Ernie was proud of his volunteer Board of Directors work with the Veteran’s Administration Central Federal Credit Union, where he served as Chairman for many years.  After retiring from the VA, he went to work at the credit union for 3 years before his full retirement where he spent many good years playing golf with his regular foursome, the Graybeards, traveling with Molly, and hosting his children and grandchildren as they visited their home on Smith Mountain Lake, in Virginia.

Ernie enjoyed golf, bridge, dancing (especially the polka ) crosswords, sudoku, board games, and culinary delights, the latter done while gathered with his long time Supper-Club friends.  He was well traveled and pursued various volunteer efforts, including welcoming people to SML in the visitor’s center.

A memorial gathering will be held at a later date.

Celebrate Ernest's life with a short message, photo or video!

Molly: Ferne and I were sorry to read of Ernie's passing and wish you God's caring grace as you mourn the loss of your lifelong pal. We always so enjoyed talking with Ernie at supper club gatherings. We know you and the family will miss him dearly; take some condolence, though, in the joy he brought to all of us during his earthly life. Ferne and Jerry Hale

Molly, I am so sorry to hear of the passing of Ernie. Lots of fond memories chatting with him at the gym. My thoughts and prayers are with you and your family. Joyce