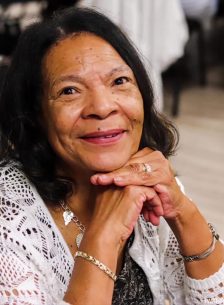 Barbara Sadler Davis, entered into eternal rest on August 2, 2022. She was born on Saturday, December 8, 1951, to the late Ernest Penn Sr. and Emma Sadler Brown. Barbara is also preceded in death by her stepfather James R. Brown and sister-in-law, Sharon Davis Linsenbigler.

Barbara was educated in the Amherst County and Lynchburg Public School system, graduating from Dunbar High School in 1970. She retired from Central Virginia Training School after more than 40 years of service. She attended Lovingston Baptist Church. Barbara enjoyed family gatherings, reading, shopping, gardening, spending time with her “Lunch Buddies”, and spreading the Gospel through songs with Amazing Grace Chorale and Infinite Praise.

Im so sad and my thoughts and prayers will be with each of you . Barbara loved 'husband" her children, sisters, all of her family and friends with all of her heart. What a blessing to be her friend. Hold on to the memories. God will take care of you,. I will miss her so much too,. Love Sue

Lee & I are so saddened for the loss of our dear friend Barbara. May she RIP in Heaven.

Martin and family, My prayers are sent to you in the loss of your special loved one. I met Barbara many years ago. She was always a beacon of light and a very supportive parent when I taught her sons. May you be surrounded with the peace of God and showered with love in the days to come. Our deepest condolences, Earl & Vernessa Harvey

My thoughts and prayers are with the family at this time . I worked with Barbara years ago and remember her for her laugh and sense of humor. Keeping the family in prayer

Posted by Malvina Sandidge-Penn on August 11, 2022

You and your family are in our hearts/minds/prayers for the loss of "our dear friend Barbara". We worked together at CVTC for years. RIP my friend.

My condolences to the family! I have many fond memories of Barbara, she will truly be missed!

Posted by Jacqueline Bradley on August 8, 2022

Barbie Ann and I were 1st cousins. She became my sister as I was the only girl out of the 3 Sadler children. (William). She taught me how to dress,as she was always so neat and sharp. She turn me on to enjoying book reading,she taught me along with my mom what it looks like to love your children ,parents and freinds. We talk and laugh for hours on our day which were Saturday's about everything and really nothing. She was my listening ear as I was hers. I love you gurl and will.miss our times together. My Sincere Condolences to my family. You were a great wife mother ,sister,aunty, and freind. RIP dear one and I will.see you when I get there and we can pick up where we left off.

Prayers to Barbara’s family. She was one of my favorite customers. Barbara always spoke of her family. The last time I seen her she was telling me about a trip she took to Flordia to visit her son. She showed me many pictures from this trip. The last thing she said to me was “ I love you” this is just so sad. I will truly miss her. She was a beautiful lady. Very classy. I feel so privileged to have known her.

My condolences to all of her family and friends. Barbara was a true definition of a friend, advisor, a comforter and a blessing to me. Every call we shared ended with "I love you, Love you too! We shared some great laughs and memories of our old job. I will truly miss my friend. RIP!