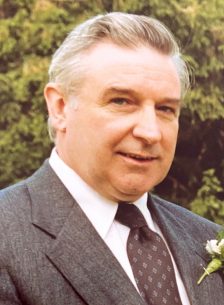 It is with great sadness that we mourn the passing of Dr. Michael Godfrey Bale of Forest, Virginia on March 8, 2022, age 85. Michael leaves behind Nancy Marie Trahey, his wife of 26 years.

Additionally, he is survived by his younger brother Andrew, and wife Marie, and by his children: Alison; Christopher, and wife Caroline; and Richard, and wife Ann. Also, by his granddaughters Melissa, Stephanie and Kirsten.

Born on May 18, 1936, in Southampton, United Kingdom, Michael was the son of the late Frank and Marjorie Bale. After completing a Ph.D. in metallurgy, he enjoyed a long and distinguished career with the nuclear industry, both in the United Kingdom and the United States. He retired from BWX Technologies in Lynchburg, Virginia.

Michael was a gifted pianist, who loved restoring old British cars, and constructing model steam trains. His sharp wit, gentleness and generosity will be greatly missed.

Mom and I are sorry to hear of Michael's passing. Dad always spoke of Michael with so much respect. We send our love and best wishes to Nancy and the family during this difficult time.